Every year a UK university hosts a meeting for doctoral students working in the fields of ethnomethodology and Conversation Analysis. This year it was held at Cardiff University. Jack Joyce and Linda Walz have sent in a lively and inclusive report, and Louise White has kindly contributed a warm personal reflection.

The 7th biannual EMCA Doctoral Network event was hosted at Cardiff University. It continued the tradition of providing the opportunity for PhD students to explore the various ways with which EMCA is employed around the UK and give us all a glimpse of EMCA research outside of our own departments.

The collegial and supportive spirit which the EMCA Doctoral Network has fostered over the past events continued with an afternoon start on the first day, which allowed us some time to explore Cardiff and the many sites where Doctor Who and Torchwood are filmed.

Our host, Robin Smith, welcomed us all to Cardiff and to the beautiful Glamorgan Building. The meeting opened with a trio of presentations on institutional data. Bogdana Huma’s (Loughborough) paper explored how prior relationships are enacted in business-to-business calls. Tatiana Gherman (Loughborough) focused on the macro-organisation of meetings and the methodological challenges of such an investigation. Marion West (Wolverhampton) examined undergraduate supervisions and how roles are constructed in situ in such interactions. The first opportunity to engage with some data was up next, Jack Joyce (Loughborough) shared his data on resistance in medical interactions, raising issues of the tensions between personal and institutional identities. Matters of identity negotiation were further explored through Emma Greenhalgh’s (Sheffield) data on teaching English to a group of adult learners.

The first day was rounded off with a superb plenary by Richard Fitzgerald (Macau), who posed the critical question as to whether the EMCA methodology apparatus was still appropriate in a modern world with new forms of data. Richard emphasised that in ethnomethodological inquiry, the phenomenon takes prevalence over the methodology. He introduced us to the Sacks archive held at UCLA and ended his talk by encouraging us as EMCA practitioners to read Sacks’ work as often as we can throughout our careers and, given the opportunity, to visit the Sacks archive ourselves. Discussions were continued over drinks and a meal at a local Indian restaurant. 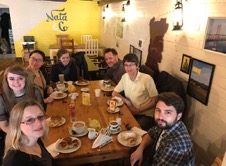 After some of us had enjoyed breakfast at a Portuguese bakery, day two began with a paper session with a general focus on sequence organisation. Yuening Yang (Loughborough) identified resumptions markers  employed to return to a prior topic. Mariana Cantarutti (York) explored the (dis)association between participants from an Interactional Linguistic approach. Julian Molina (Warwick) shared his data on board members’ process of agreeing on a vision for young people’s education and skills. Clare Nicholson (Anglia Ruskin) started the second paper session of the day on how people with intellectual disabilities do resistance. Marc Alexander’s (Loughborough) talk investigated (non)agentive formulations in noise complaints and Fabio Ferraz de Almeida (Loughborough) explored how suspects achieve counter-denunciations in police interviews. The blame and police theme continued with Louise White (Loughborough), who shared a police interview extract prompting a discussion of how the suspect distances themselves from blame by invoking contrasting membership categories. Linda Walz (York St John) gave the final data session of the day, on an investigation into how expatriate bloggers mobilise categories in their personal narratives to work through what impacts moving abroad is having on them as a person.

The meeting concluded with further application of membership categorisation to online data as William Housley (Cardiff) gave an engaging plenary, calling for unity and solidarity between different strands of ethnomethodological research in an increasingly interdisciplinary environment. He pointed to the need to “move beyond the narcissism of small differences” and begin to think of our tradition more holistically. He took up issues addressed by Richard Fitzgerald’s plenary, encouraging engagement with emergent phenomena in social media and the methodological challenges these entail. Due to the social changes we are witnessing, he noted that sociology and with it EMCA will become one of the most important disciplines in the 21st century.

The meeting showed the breadth of ethnomethodological research on both institutional and non-institutional data in face-to-face, telephone and online settings. It was imbued with a spirit of open-mindedness where differences between research strands and the variety of data investigated can engender new discussions and maybe even challenge existing methodologies and hopefully contribute to moving the field forward. The EMCA Doctoral Network Meeting proved once more to be a great opportunity for inspiring exchanges within the research community. We all look to the next meeting in Newcastle, eagerly anticipating a similarly outstanding event. 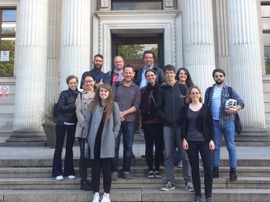 Catching a particularly early morning train from Loughborough to Cardiff was a painful prospect. But, as I sleepily greeted three of my fellow Loughborough attendees on the platform at Loughborough station clutching my bundle of train tickets, we were all feeling excited for what the next couple of days would entail. Lots of EMCA!

When we arrived, we received a very friendly welcome. Handshakes were swapped and there was a round of introductions amongst all attendees and, thankfully, there were no cringey icebreakers. The usual jokes about the large number of people from Loughborough in attendance bounced around the room, but it was great to meet those who had travelled from elsewhere including York, Wolverhampton, Warwick, and Sheffield, some we had met before and others we had not. The number of 13 doctoral students in attendance, though on the small side, provided an intimate, rather than intimidating, atmosphere for the meeting.

Looking at the programme, it seemed a shame that there were no technical sessions or reading groups. However, these sorts of sessions can be difficult in terms of engaging a whole group, and keeping everyone focused on the same activity or topic which isn’t necessarily relevant, or interesting for all involved. The meeting was very varied and diverse without these sorts of sessions, and it was a pleasure to spend our time learning more about each other’s projects in such a warm and encouraging environment. In terms of the content of the sessions, there was a great mixture of presentations and data sessions on a variety of topics and with a generous length of time dedicated to each, in particular the data sessions.

William Housley’s engaging plenary was a fantastic end to the two-day meeting. Although we received the programme for the meeting only a few days before it began, this meant that every session the programme promised, we received. It was clear that the programme had been carefully put together, the sessions were allocated in a logical order, which allowed comparisons and connections to be made across them. Dr Smith also notified us that the Wales Doctoral Training Partnership would generously provide funding towards reimbursing our accommodation and travel expenses, something we were very grateful for. Although there was no set hashtag encouraged at the event, attendees intuitively used #EMCA; and that seemed to do the trick.

All in all, we found Cardiff University to be a brilliant host for the EMCA Doctoral Network Meeting. Next stop: Newcastle University, October 2017.