CA is blessed with some exceptionally able communicators, and there is a growing appetite to reach out to members of the public with a show of what CA can do (see the other blogs in this “CA Teaching” section). One now well-established tradition is for members of York’s Centre for Advanced Studies in Language and Communication (CASLC) to engage in York’s research festival (“Yornight“), and I’m delighted that Rose Rickford has sent in a report of what happened this year.

I find it quite daunting trying to explain CA to people. The discussion often seems to go down either the mindreading route or the “men are from Mars women are from Venus” route. It can be difficult to find a way back without sounding like you’re just telling people that they have it all wrong. Even when you do manage to communicate the ideas, it can be hard to get across why it’s so interesting or why anyone should care!

Doing a public engagement event, then, felt like quite a challenge. Yornight is an afternoon of activities run by University of York researchers for the public. It’s incredibly popular – this year’s event was attended by over 4,000 people. A lot of those people were children, and most of the activities are child friendly. Some of them sounded wonderfully exciting. A friend sent me a message the day before: “please tell me yours is the Neanderthal cheese-making stall or the bug-eating activity?”.

What can Conversation Analysts bring to the scene?

Well, I was very fortunate to be on a team with three people who had much more experience than me of engaging the public in their research. Marina Cantarutti, Reihaneh Afshari Saleh and Merran Toerien helped me learn the ropes, and I was astonished by their simple, creative ideas for helping people to think about talk as action in a fun, non-patronising way. As a result, our stall was completely surrounded for the full four hours of the event, and there was often a queue. I was totally exhausted by the end but left feeling much more confident that it is possible to engage the public in CA in a meaningful way.

We ran three activities aimed at three different age groups, and also had a poster for passers-by.

This activity aimed to get children to identify social actions and think about how they might design turns to produce those actions in different contexts.

We started off by showing the children how to make a “chatterbox” out of paper. It turned out to be very attractive to passing kids and drew lots of people to the stall. This was my main job during the day – I am now an expert at chatterbox making! 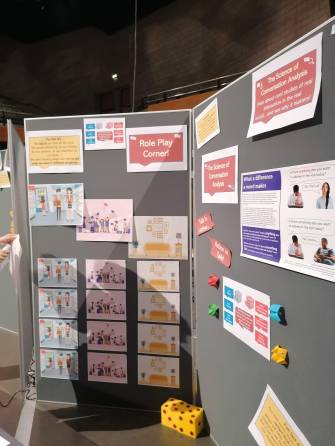 Once a child had made their chatterbox and decorated it with sticky eyes and felt tip pens, they were invited to proceed to our role-play game area. Here, Reihaneh presented them with a pair of giant foam dice (also very attractive to young eyes). One die represented a social action (requesting, offering, complaining or telling-off), the other a place (home, school or supermarket). The children were given a different role-play scenario depending on how their dice roll went. For example, if they rolled a 2 (requesting) and a 6 (supermarket) their scenario was “You want to buy a particular pack of crisps that you like but the packet is on the highest shelf. You see a member of staff coming towards you, what do you say?”.

Using the chatterboxes as puppets, Reihaneh acted out a fantastic improvised role-play with every single child. The children loved it, and it gave them an opportunity to think about how they would design a turn depending on the social action they were aiming to achieve.

For older children: The Conversation Factory

This activity was a little more advanced and relied on participants being fluent readers. It aimed to engage children in thinking about how sequences work and notice that initiating actions make relevant matched responsive actions.

For this activity Marina produced about a million (well, it must have been 100 or so) laminated speech bubbles. Each speech bubble had a “turn” written on it. The task for the children was to arrange the speech bubbles into conversations.

These are just a few of the turns they could choose from:

The beauty of this activity was that the participants could either focus on building conversations that work and make sense (which some enjoyed doing), or they could play around with making silly conversations that make no sense (which some found hilarious). Both options allowed the children to think about how one turn makes relevant another, and that not any turn can meaningfully follow any other. For those who got really into it, we also had labels with actions written on them. Once a child had built their conversations, they could take it to the next level by labelling their turns with the actions they performed – essentially annotating their data! Marina patiently spent ages with some kids who were really interested, and it was awesome to watch them sharing the beauty of sequences.

For young people and adults: Spot the difference

This activity gave people a chance to listen to some real data and do a bit of their own analysis. It got people thinking about turn design and preference structure.

Merran selected two call openings from the Field corpus. (Big thank you to Liz Holt for allowing us to use her data in this way). In both, the caller calls to find out whether the call recipient will be attending an event, and the recipient declines. One recipient, however, designs a very mitigated rejection with lots of dispreference markers. She never, in fact, says “No” at all. The second recipient is much more direct and the sequence that follows shows the caller’s orientation to this as deviant from the norm (by soliciting potential explanations).

Participants listened to the data and Merran asked them to think about ways in which the two interactions were similar and ways in which they were different from one another. She got them to look for a place in which the first recipient actually did the rejection, allowing them to notice that a “No” was never produced. She then used the data to engage people in discussion about how we design our turns to achieve different outcomes, and how this can make a difference to the ongoing interaction. I learned a lot from listening to how Merran did this – some of the issues I have had with talking to people about CA were dealt with artfully by using people’s comments and questions as an opportunity to tell them more about different bits of CA research that they might find interesting.

As well as the activities, I made a poster to try to help people understand how CA research can be useful in the real world. I based it on Heritage et al (2007)’s work on doctors soliciting patients’ additional concerns.

A few people asked me about it during the day, and it was a good way of demonstrating why conversation analysts focus on intricate detail: that one word can make so much difference and have a real-world impact. I made the error of printing the poster A2 size though – if I do another event I’ll definitely make it bigger, so that it has more visual impact. Nonetheless, it did seem to interest people which was great.

A big success…and a big learning experience for me!

Overall, the day felt like it went really well. People seemed excited by our activities and I think they learned from them too. Although some kids just wanted to do the arts and crafts stuff, most got into the actual CA-related content, and lots of adults got really involved in analysing data and asking questions.

For me, I now feel a lot more confident about engaging with people about my research. It gave me loads of ideas about how to get to the nub of what we do as conversation analysts in ways that go someway toward showing people why it is worth caring about. A big thank you to Yornight for having us, and a big thank you to my wonderful colleagues for showing me how it’s done!

Rose Rickford is a first year PhD student in Department of Sociology, University of York. She is using CA to examine decision-making and deontics in meetings of volunteer-run community groups. For more information see The Community Meetings Project.