Issue 1 of volume 53 of the journal (the fist issue of 2020) is devoted to non-lexical things we do in interaction – whistling, clicking, moaning: things which are not language, but are deployed in language-like ways. From a wealth of fascinating articles, I’m delighted that Elliott Hoey has agreed to send in lively report of his investigation into the uses of the sniff.

For the current special issue of ROLSI on non-lexicals, edited by Leelo Keevallik and Richard Ogden, I reported some findings about sniffing in conversational interaction in English.

Sniffing refers to sharp, audible inbreaths through the nose, typically instantanous and out-of-sync with autonomic respiration. This is different from other things we might call ‘sniffing’, like olfactory smelling (for which see the excellent account by Lorenza Mondada  in the same issue), and different again from the kind of sniffing – better captured by the term “sniffling” – which we associate with crying (- for more on that, see Hepburn 2004).

For the Special Issue article, I relied mostly on finding sniffs in existing transcripts of conversation. But the first hurdle I came across was that that there isn’t a conventionalized way to transcribe sniffing, accepted and used by all transcribers. The most common method was a simple transcriber’s gloss, ((sniff)), but I also encountered .sn, .snh, .snf, and .nff. In the end, after knocking on the door and consulting with Lorenza Mondada on how she was transcribing olfactory sniffs, we settled on .nh to represent sniffing. With .nh, we wanted to capture the articulatory characteristics of sniffing (i.e., nasal and inspiratory), and also provide for finer acoustic differences, such as lengthening (.nhhhh) or, in my paper, swiftness (>.nh<). We could have gone a lot further, but that seemed to us a usefully robust working start. 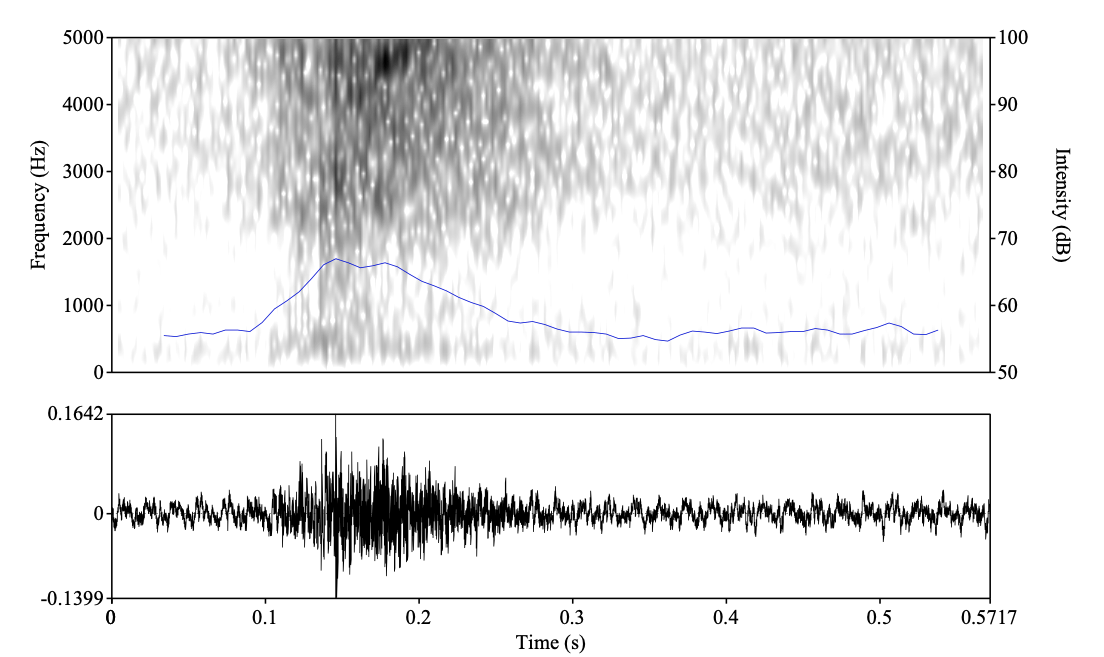 Spectrogram and waveform of a typical sniff

Why look at sniffing, anyway?

Sniffing deserves our attention for a few reasons. For one, it’s fairly common and perceptually distinctive, and so for the analyst it stands out as a nice object for collection and close examination. There’s also reason to believe sniffing exhibits the kind of orderliness that conversation analysts presume to be pervasive. Given that talk is itself finely organized, and that talking is bound up with breathing, then we expect sniffing, which is a form of breathing, to be similarly organized. In addition, from a methodological perspective sniffing presents an interesting challenge for the tools of CA. For an approach that gains much of its empirical purchase from participants’ situated orientations to a phenomenon, how might CA tackle something which, as Goffman observed, we are ordinarily obligated to disattend?

Sniffing as a delay device

Based on a collection of 70 cases, I analyzed sniffing with reference to its structural positioning. What I found was that sniffing in the pre-beginning phase of a turn recurrently served as an indicator of dispreference.

For instance, in the conversation below, Nancy asks her boyfriend Michael a logistical question, what time should they [that is, the other coparticipants] come over tomorrow?. In the place where a response ought to begin, we observe a sniff, accompanied by gaze withdrawal, and followed by a gap (lines 2-3). Together, these practices prefigure a dispreferred response, which arrives in the form of the non-response I don’t know what time (line 4). 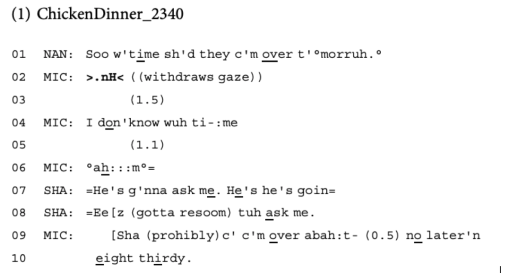 Moving from turn pre-beginning to within the turn, sniffing recurrently operates as a delaying device. I regularly found cases where speakers sniffed when doing ‘precision’ word searches and during delicate actions like producing an account disagreement or for ‘why I’m breaking up with you’. Sniffing in pre-beginning and mid-turn position thus works as a way for speakers to audibly not speak at that very moment.

A fair question to ask is whether sniffing is just an alternative to oral inbreaths. After all, speakers can either inhale through the nose or mouth or both. To address this question, I compared sniffs and oral inbreaths in the same sequential environment: turn post-completion. Based on distributional evidence and deviant case analysis, I found that sniffing was treated as a method for turn-yielding, whereas oral inbreaths were treated as devices for turn-continuation. This shows that participants understand sniffs in this environment as distinct practice from oral inbreaths.

My article largely concentrated on the regulatory functions of sniffing in conversation, but we may also speculate about its status more generally as a ‘liminal sign’ (see the fascinating overview and discussion by Mark Dingemanse in the special issue) in other social situations. Take for instance, entering a waiting room or some other space pre-populated by strangers. A sniff in such cases can work as a kind of announcement of copresence. This derives from its audibility as well as its apparent semantic neutrality – it indicates ‘there is a body here’ and implicates nothing in particular from others. In this way, sniffing is ordinarily, to adopt Garfinkel, heard-but-ignored.

I hope to have shown not only that the seemingly insignificant act of sniffing is in fact an orderly practice, but also that CA offers methods to grasp and analyze something that, in many societies, is specifically disattended.