Helsinki’s Centre of Excellence for Intersubjectivity in Interaction has over its short history become an international powerhouse of interaction research. A celebratory conference was held in May, and I’m delighted that two of the Centre’s key personnel Taru Auranne and Taina Valkeapää, agreed to reflect on how it all went.

The conference “Intersubjectivity in Action” (IIA) was organized in the hesitant spring of Finland on May 11-13, 2017. It celebrated the final year of the Centre of Excellence in Intersubjectivity in Interaction, which has been running at the University of Helsinki since 2012.

The Centre of Excellence has been studying intersubjectivity for five and a half years now. We are a diverse group of researchers from different fields of science, mainly linguistics and social sciences. The thing that initially brought us together – in addition to the research interest of intersubjectivity – is the method of Conversation Analysis. Our multidisciplinary approach has been fruitful: researchers have learned from each other and cross-scientific discussion has broadened and deepened perspectives. This open-minded approach was something that we wanted to share with the world-wide community.

120 presentations The IIA conference received approximately 180 submissions for presentations in the call for papers in September. The amount and overall quality of the abstracts was so impressive that we decided to expand the size of the conference from the planned 80 presentations to nearly 120 papers. The accepted papers were grouped under themes such as Responses, Therapy and counselling, Mobility and multiactivity, and Imperatives and directives, just to mention a few.

A view of one of the plenary sessions: Taru Auranne at left, Anssi Peräkylä introducing Federico Rossano on the podium, and Taina Valkeapää somewhere among the assembled company. Photo: Matti Ahlgren

Our plenarists represented a range of disciplines and approaches. Lorenza Mondada opened the conference by exploring the action of tasting in cheese shops. She showed the audience how the very private activity of tasting is also negotiated and made possible in social interaction. Federico Rossano explored human interaction through observational and experimental data. He proposed that the sense of accountability is one of the unique features that makes our interaction distinctively human.

The conference book of Abstracts is still available via this page

Jörg Bergmann’s plenary presented what happens when a recipient persistently refuses to respond. It seems that after three attempts at a response pursuit, the interaction enters a new phase or trajectory, be it a shift in attention or a completely new action. Leelo Keevallik illustrated vocal and bodily synchrony through data from various settings. She stressed that bodily vocalisations play a crucial role in interaction, even if they have thus far been mostly treated as private, involuntary and somewhat unimportant features. Paul Drew and Kobin Kendrick wrapped up the conference with a plenary on recruitment of assistance. They proposed that a shared focus, instigated by a private problem noticed by another, is a prerequisite for intersubjectivity.

How to organise a conference The local organizing committee began planning and preparing for the conference 18 months ago. The pace was leisurely at first, but as the event drew dearer, the preparations naturally grew more intensive. The final days of cutting name tags, printing handouts, collecting equipment and choreographing tasks seemed to flash by. During the conference, three full days of lively academic discussion and networking, 950 cups of coffee and tea, 170 kilograms of salads, 40 basketfuls of buns and pastries, and one conference dinner in an old cable factory building resulted in an unforgettable celebration of intersubjectivity! 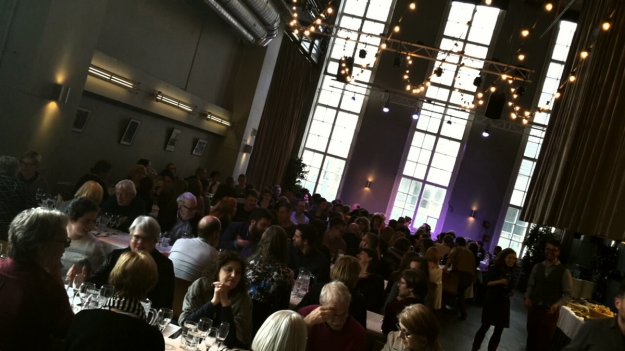