One of the fastest-growing areas of CA-inspired research is in the filed of computer-mediated communication – everything from human-machine interaction through to synchronous and asynchronous social media.  In this very welcome guest blog, Jo Meredith, Trena Paulus, Wyke Stommel and David Giles send in a report on the 3rd International Symposium for the Micro-analysis Of Online Data: Online communication, discourse and context, a significant meeting of cutting edge research.

The micro-analysis of online data network (or MOOD as we like to be known) was formed as a result of the Discourse-Communication-Conversation conference held at Loughborough University in 2012. At that conference, it became clear that there were a number of people working on applying interactional methods, such as conversation analysis and discursive psychology, to online data.

While CA methods were developed using telephone and face to face interactional data, they have increasingly been used for online data. Trena Paulus, along with Jessica Lester (Indiana University, USA) and Amber Warren (Indiana University, USA), has been working on an extensive literature review of peer-reviewed journal publications that report the use of CA methods to understand text-based CMC data. Trena and Amber shared the findings of their literature review at MOOD this year, noting that they have thus far identified nearly 80 articles (the earliest published in 1994), with three of these articles appearing in ROLSI. The studies appear across 42 different journals, with first authors from 14 different countries. Studies have analysed data from a variety of contexts including language learning, counselling, and mundane talk and have drawn upon various interactional features to understand the data which will be familiar to CA researchers, such as turn design, turn taking, membership category analysis and many more.

While the network was formed by people predominantly working within a CA framework, it also encompasses those who are working with other methods which take a predominantly qualitative approach to analysing the language used online. At our events we’ve had people using interactional sociolinguistics, pragmatics, Foucauldian discourse analysis, functional systemic linguistics, ethnomethodology as well as conversation analysis and discursive psychology. Following successful events at Radboud University in Nijmegen in 2013 and at the University of York in 2014, the 3rd symposium was held in July at the University of Zürich and expertly organised by Emanuel Ruoss, Katrin Lindemann and Caroline Weinzinger, to whom we offer our sincere gratitude for all the effort they put in. Participants came from 12 different countries for two days of stimulating scholarly discussions. 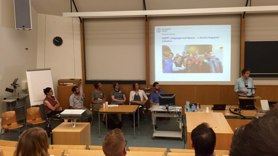 The MOOD conference opening at the University of Zurich.

The most recent symposium covered a range of methods, data sources and topics. The keynote speakers – Professor Miriam Locher from University of Basel and Dr Sean Rintel from Microsoft Research Cambridge – provide good examples of these contrasts in methods and data. Miriam’s talk focused on methods for the analysis of online advice giving in different types of data like online advice columns, smoking cessation websites and e-mail counselling. She reported from her current large research project ‘Language and Health Online’, of which the results will be presented at the symposium ‘Typing yourself healthy’ in Basel next year.

Sean Rintel’s talk, on the other hand, focused on spoken interaction occurring online via Skype or video messaging. He demonstrated, amongst other things, how we can use ethnomethodologically-informed methods to analyse how people make use of the affordances of video messaging, and how they manage some of the difficulties of interacting online. He also showed how such methods can inform us about why particular means of online communication ‘work’ (or are popular) and why others aren’t.

MOOD very much prides itself on our events not simply involving paper sessions. Therefore, additional sessions were held where PhD students could receive advice from more senior MOOD members about some aspect of their PhD research. In addition, three data sessions were conducted, where there were – as ever with data sessions – lively discussions about data from online chats and Wikipedia. A final panel session was held with the two keynote speakers along with David Giles and Jo Meredith to broadly discuss our experiences of doing online communication research.

The range of more ‘traditional’ paper sessions was incredibly broad, with sessions on: textual participation, sequentiality, Twitter, methods and technical issues, membership, multi-modality and counselling. We had, then, a range of sessions which focused on methods, as well as findings and different types of data. As it turns out, the types of data were even broader, with analysis of data from sites such as Twitter, online educational forums, Twitch.tv, Facebook, medical forums, chat helplines, Hungarian political blogs and many more.

Some of the participants at the MOOD Zürich conference

If we had one take-home message from this blog, it would be that there is an ever-growing network of people who are studying online communication within the broad CA/ethnomethodolgy field. These researchers are using a range of methods, and are starting to find new and interesting ways to collect data, including screen-capture software, key-stroke logging and so on. More to the point, they are studying many different types of interaction which occur online and trying to negotiate how best to use CA terminology and methods for analysing such data. In fact, many of the discussions which occurred in the panel sessions revolved around such issues. As the use of online media for interaction and the different ways of interacting online continues to grow, we would humbly suggest that CA has a role to play in offering insight in to how such interactions are organised in practice.

My Tweets
Join 3,465 other followers