In this, the second report on the busy International Pragmatics Association conference, we have the reflections of the organiser, Catrin Rhys, intercontinental visitor Chase Raymond, and Twitter follower Saul Albert.

Hosting IPrA begins with creating the bid and an appropriate theme and ends, after everyone has left, with report writing for the local sponsors. In between is a three-year rollercoaster with periods of intense busy-ness and quiet periods where you wake up in the middle of the night panicking that you’ve forgotten something.

Conference organising on this scale certainly takes you out of the normal routine of academic life. From site visits in hard hats, to being treated like royalty at a formal food tasting, we were temporarily “valued clients” generating significant income for the local economy. It was satisfying, in that context, to be able to choose a local cooperative and a social enterprise as suppliers.

What I hadn’t expected was how much time I would spend agonising over mundane details like numbers of bottles of wine/beer and ratios of red wine versus white wine for the reception. Thanks to the generosity of the publishers John Benjamins, I could overestimate and we introduced a great new tradition of the closing drinks reception!

Academically, I was very excited at the prospect of hosting IPrA. In my naïveté, I envisaged getting to influence the programme so that I could enjoy a week of fabulous CA sessions. It almost worked! We had brilliant CA plenaries who took the conference theme seriously and were generous in their communication of CA research to the wider IPrA community. The programme overall offered an embarrassment of CA riches – so much so that I couldn’t avoid serious clashes in the scheduling.  And it was such a pleasure to see my home town full of CA folk. What I hadn’t counted on was how little of the conference I would actually get to myself and how distracted I would be when I did. It was wonderful, though, to see my phd students getting the chance to become part of the academic community and engage in a bit of academic fandom.

Overall, I can honestly say that hosting IPrA was a wonderful experience. So watch this space for the next Belfast CA conference!

[Editor’s note: If you look carefully at the photo, you can just make out Catrin performing an unexpected act of heroism – crouching below the piano to hold up the music stand for the length of the recital]

This year’s meeting was an all-around stellar experience. Notwithstanding some initial AV problems at the conference venue, the talks I had the pleasure of attending were truly amazing.  A few highlights included Paul Drew and Kobin Kendrick’s panel on recruitments, which showcased a range of new projects making use of that conceptual umbrella; Ed Reynolds and Jessica Robles’s panel on emotion in interaction, with each paper further underscoring just how systematic and action-oriented displays of emotions are; Charles Antaki’s panel on entry and re-entry into interaction, which included data from a variety of contexts and participants; and several great panels on applications of CA to institutional contexts, most notably one on end-of-life conversations, organized by Marco Pino and Ruth Parry.

Overall, I was personally struck by both the quality and quantity of CA scholars and scholarship at this year’s meeting. At the last IPrA in 2015 in Antwerp, I felt as though conversation analysts were ‘guests’ at the Pragmatics party, so to speak; whereas at this year’s conference, I felt that our presence was significantly more central. This was clearly evidenced by well-attended ‘interface’ panels in which CA was brought to bear on classic debates in Pragmatics—for instance, Rebecca Clift and Liz Holt’s panel on the “Pragmatics-CA Interface”, and Lucas Seuren and Traci Walker’s panel on form and function. In addition, though, it cannot go without mention that CA was very strongly represented at the conference-wide level as well: Four of the six plenary speakers have published work in CA (even if that wasn’t what they all focused on in their plenaries), and Sandy Thompson was awarded the Association’s very first John J. Gumperz Lifetime Achievement Award. In sum, then, this year’s meeting has cemented IPrA as one of my ‘go-to’ conferences (alongside ICCA) for high-quality CA.

The Belfast Telegraph wrote that the conference was expected to bring £2.5 million to the city over its six-day run, and so it’s safe to say that organizing this event was no easy task. My thanks to the organizing committee, especially its chair, Catrin Rhys, for making this event a spectacular success, and I eagerly await the 2019 meeting in Hong Kong.

I wasn’t able to attend the conference, but I followed it surprisingly successfully from 1,000 miles away in Boston.

I’ve been on twitter so long that I remember when all this was only a few fields (mostly computer science, HCI and electronic engineering). It’s taken a few years for the #EMCA community of language and interaction nerds to catch up, and the hashtag #IPrA2017 marked the first year it became possible to follow almost every panel and session from the comfort of your nearest screen.

Following the #IPRA2017 twitter feed gave me the omniscient feeling of being able to monitor multiple simultaneous panels, and there was some comfort in knowing that since there were 22 parallel sessions this year, local attendees were missing out on almost as many talks as us tweeps! The other great advantage of having so many IPrA tweeters is that there’s now an archive of memorable quotes, comments, questions, and other ephemera that might otherwise have been exchanged privately and forgotten between coffee breaks.

Since I happened to be evaluating social media monitoring services for a project, I also had the opportunity to look at some metrics courtesy of Talkwalker, a social data intelligence company.

Historically, tweets by IPrA delegates between #IPrA2007 (the first conference after the twitter platform was launched) and #IPrA2013 can be counted on the fingers of one hand, so there’s not much to compare with there. The first strong showing was in 2015, when Martin Siefkes collected the 1200-odd tweets sent to the #IPrA2015 hashtag between days 1-3 and days 4-6. However, the twitter conference saturation threshold (when the number of tweets exceeds the number of delegates) was crossed for the first time this year with over 3000 tweets using the #IPrA2017 tag in July alone.

A list of the most often co-occuring hashtags with #IPrA2017 shows a mix of the conferences’ key themes of linguistics, pragmatics and, of course #EMCA, along with references to plenary talks and speakers such as @LizStokoe’s #CARM and @wordspinster Debbie #Cameron. One of the biggest pragmatics-related news items of the year – Deborah Tannen’s take on the #ComeyHearing and attendant #TrumpRussia stories – also get a strong mention, as does @BarbaraDeCock’s analysis of #jesuis and #JeSuisCharlie hashtag use in the aftermath of the Charlie Hebdo attacks in Paris.

However, a keyword cloud of the most common hashtags and usernames using #IPrA2017, cross-referenced with the most likes/retweets seems surprisingly #EMCA flavored. Perhaps this confirms my biased view that the #EMCA sub-community is particularly engaged and engaging on twitter! 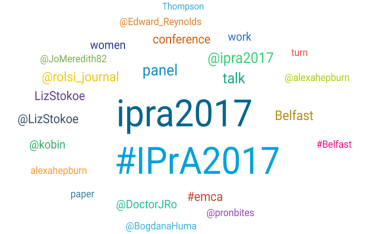 Most common names and tags in IPrA tweets

The leading ‘social influencers’ in terms of their reach, post-frequency and levels of engagement from other twitters have a similarly healthy leaning towards #EMCA – and the top three clearly reveal a disproportionate source (in terms of the researcher’s base or training) in Loughborough University: @JoMeredith82 (now at Salford), @rolsi_journal (Charles Antaki),  and @DoctoJRo (Jessica Robles).

Finally, some gross demographics: 73.2% of people using the #IPrA2017 hashtag identify on twitter as female whereas 26.8% identify as male, mean age early 30s, mostly distributed between 25 and 44. The career and geographical breakdowns that mostly teachers and students are tweeting about #IPrA2017, mostly from Belfast and N. America –  which intuitively makes sense, given academic career structures and the location of the conference and related research centres.

Given that so many tweeters from this year’s IPrA are also #EMCA aficionados associated with the East Midlands, it seems likely that #ICCA2018 in Loughborough is going to be the next big hashtag.

My Tweets
Join 3,501 other followers