Conversation Analysis is finding application in all sorts of fields, and perhaps none so sensitive as military manouevres… but as Antti Kamunen explains, it can all be in the service of defusing a crisis and working towards peaceful resolution.

What happens inside a patrol car when you notice you are about drive into a minefield? How do you act when you suddenly come across a life-threating situation and have to make decisions quickly? What happens when you get lost on your patrol route in a potentially hostile territory?

These are some of the questions we have been dealing with for the past few months. Luckily, though, the situations have taken place in a safe training environment, and our role in them has been that of an observer and an analyst. The people at the centre of all the action are a multinational group of military officers, in training to become UN Military Observers. How, then, did we, three interaction researchers, end up in the mix?

First, a bit about who we are, exactly. Our project is called PeaceTalk: Talk and Interaction in Multinational Crisis Management Training, and it is funded by Academy of Finland, from the beginning of September 2019 until the end of August 2023. At the moment, our team consists of three researchers: our PI, Professor Pentti Haddington; myself, currently as a PhD student and then as a postdoctoral researcher from March onwards; and Iira Rautiainen, who is doing her PhD on multinational crisis management training as part of the iTask project, funded by Oulu Univesity’s EUDAIMONIA institute. We will also get a second postdoctoral researcher next year.

Our first contact with the crisis management community took place in 2016, in connection with our other project, iTask. People working for the Finnish Defence Forces had heard of our project and became interested in our focus on multitasking, and we were soon in talks with the Finnish Defence Forces International Centre (FINCENT), who organise training for UN peace keepers, military observers and military advisors. Our main collaborators FINCENT and the National Defence University (NDU) have been extremely welcoming to us and provided invaluable help with our research. We are also collaborating with Crisis Management Centre Finland (CMC Finland) on the interplay between civilian and military crisis management and organising joint seminars and workshops with researchers from Linköping University (on complexity of interaction, instructions, etc.) and Loughborough University (crisis talk, CARM).

Currently we are doing research on the UNMEM (United Nations Military Experts on Mission) course, which trains UN Military Observers (UNMO). The UNMOs’ task is to move around in crisis areas and observe, for example, whether the parties of a conflict comply with ceasefire agreements. They report their observations and can also act as neutral mediators between parties. Talk and interaction, thus, are vital in UNMOs’ work – not only for successfully doing their job, but also for their personal safety. After the course, many of the course participants will be sent to ongoing crisis management operations in the various crisis areas around the world. 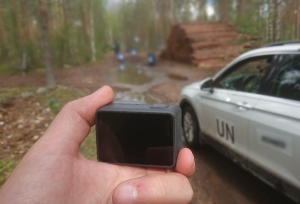 Collecting data in the wild

We have collected data on two UNMEM courses this year, in the form of video-recordings, field notes, personal conversations, and course materials handed out to the participants (such as info leaflets, maps, etc.). We have recorded interactions taking place inside patrol cars during patrolling exercises, in simulated negotiation and mediation cases, as well as practical emergency first aid exercises. 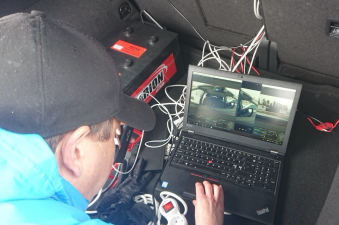 Entering data in the boot

Currently, though, we are focusing on the course participants’ talk and action as part of the various tasks connected with car patrolling. From the car patrolling data, we have identified three preliminary foci:

Our collaboration with the crisis management community has been very interesting and rewarding. The members of the community recognise the importance of communication in their work, and they also stress that importance in the training. They have been very interested in and supportive of our research, and eager to integrate our results as part of their training. 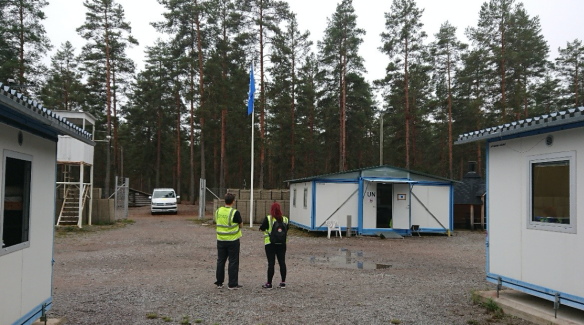 Pentti and Iira in Patrol Base 92. Notice the yellow “invisibility vests” indicating the persons do not exist in the exercise scenario!

For us researchers it has been extremely fascinating – as well as fun – to get out of our dusty chambers and in the middle of the action. Without first-hand experience on what goes on in the courses, we would be quite clueless of most of the things happening on the recordings. We are conducting our research in collaboration with the course organisers and instructors, and our aim is to highlight practices that strengthen teamwork, and in this way increase awareness on the importance of talk and social action as part of crisis management work. Our common aim is that our findings could be utilised as tools for the course organisers in recognising good practices and developing the course contents, thus making crisis management work more efficient and, most importantly, safer.