As a bonus to the guest blogs the on IPrA conference, I’m delighted that Elliott Hoey has accepted an invitation to contribute a report on Tanya Stivers’ keynote address. This was one of the most thoughtful and original presentations, raising as it did the question: did the evolution of talk favour two, and only two, people? 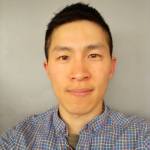 The taskmasters at IPrA convinced a sizeable crowd to attend an 8:30am plenary talk by Tanya Stivers, who suggested that conversation is “built” for dyadic interaction. Her abstract can be found here.  The following is not verbatim reporting, but simply what I recall.

She began by noting that two participants are minimally required for talk-in-interaction; that three present the possibility of ‘marginalizing’ a third party; and that four or more allow for schisming. Primae facie evidence for a two-party bias comes from studies on crowds. These show that when people are allowed to move about and interact freely, what emerges is a preponderance of dyadic formations, relatively few triads, and diminishing numbers of 4-party and 5-party interactions.

Select only one next speaker 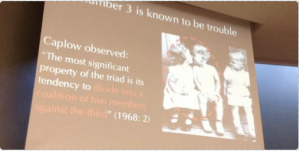 For conversational interaction, she pointed out that current-selects-next techniques normally select but one speaker, which is seen in how gaze, pronouns, and pointing often converge to single out just one person.* On top of this, the organization of sequences appears to favor a

single SPP. If more than one party could conceivably answer a question, then participants treat the provision of just one answer as adequate.

And indeed, she showed a case where the provision of a second SPP (from a different speaker) was oriented to as non-normative. Finally, she noted that there’s a physical constraint on gaze direction: you can only gaze at one person at a time, such that the rapidly changing facing-formations result in a series of exchanges that are best analyzed as dyadic.

Operating against the bias 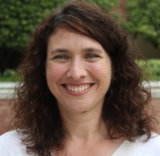 She ended her talk on an optimistic note, saying that the two-party tilt of conversation should spur investigations into how multiparty talk is achieved. Though there appears to be a bias toward dyads, that is, interactional participants routinely work to include other parties—for instance, through the practices associated with laughter and storytelling.

What is ‘the structural organisation of conversation’?

I had been looking forward to Stivers’ talk ever since reading the abstract, and overall, I found it stimulating, plausible, and provocative. To my mind, it can be seen as a kind of call to recenter of our analytic focus. As the reach and influence of CA extends increasingly beyond the orderly realm of talk-in-interaction (e.g., Haddington et al., 2014; Nevile, 2015), her keynote is a welcome reminder for us to pin down precisely what we mean when we talk about the structural organization of conversation.