We can’t always manage to get to the conferences we want to, and here Joe Ford very kindly sends in a report on an attractive meeting that many of us will have missed because of teaching duties. ‘Action description’ is a hot topic at the moment (along with other members of the ‘action’ suite – formation and recognition), so this is a very welcome bulletin from the front line.

The website for the biennial symposium of the Netherlands Anela Study Group Discourse Analysis (AWIA) describes it as “an informal and small-scale meeting”. True as this may be, its website also features a list of prior speakers extending back to 1993 which includes Anita Pomerantz, Jörg Bergmann and Geoffrey Raymond – names which, on their own, should indicate that this is a symposium which any student of interaction ought pay attention to and, if they don’t, one might also be tempted by the locations of past symposia, which have included Utrecht, Groningen and Amsterdam.

In these respects, the 13th AWIA Symposium was well in line with tradition. The location this year was Ghent, a tourist-friendly historic city (think Lincoln or York) 34 miles northwest of Brussels. While conferences do, alas, limit the time that one has available for sightseeing, we were at least lucky enough to have a venue which was itself dripping with history, with marbled corridors, a parlour for lunch and a presentation room lined with busts and artwork.

This year’s symposium also added another top-tier name to that list of invited speakers, as Jack Sidnell opened the event with a keynote on the conference theme: action description. This was, to quote fellow attendee Fabio Ferraz, “an insightful talk on the challenges and problems of describing actions.” Sidnell questioned, specifically, whether the term ‘conduct’ might not be a better analysts’ term for what we usually describe as ‘action’, with the latter term best reserved for cases where members themselves refer to aspects of their behaviour.

Sidnell drew upon the work of philosopher Elizabeth Anscombe in the process of making this argument, highlighting the need for conversation analysts to (to quote his abstract) “engage more seriously with the main currents in twentieth century philosophy.” The organisers were, to say the least, wise to leave a lot of time for questions after such a challenging talk.   The keynote was followed up after lunch (standard conference food, although a banquet wouldn’t have felt out of place in such a venue) by a session which was referred to as a workshop but, in execution, felt more like a guided data session, with Sidnell offering a tour through his extracts supplemented by audience comments and suggestions. 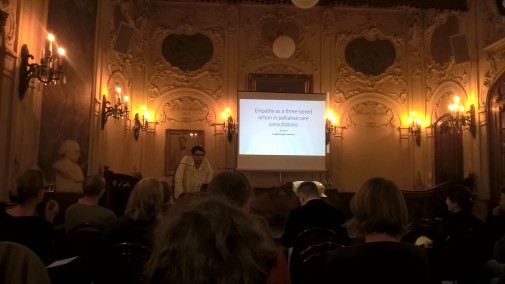 The conference room; classier than your average venue. Joe Ford at the podium

Semantics aside, this afternoon session followed up on the promise of the morning, with Sidnell both elaborating upon issues that had been raised during his earlier talk and touching upon new issues – many of which were to be further elaborated upon in the second day of the event.

A day of presentations

This second day was given over to thirteen attendee presentations, including four speakers (Fabio Ferraz, Emily Hofstetter, Bogdana Huma and myself) from Loughborough. While there were no parallel sessions or formal panels, this was not a randomly-assembled schedule, either. The day started out with a cluster of three theoretical talks in the vein of Sidnell’s keynote from the day before. It then moved on through a range of institutional and topical territories, including well-established CA favourites (medical and police interactions) and areas that have (thus far) been less explored, such as the turns that clients use when challenging their hairdressers’ actions and intention ascription between board game players.  Conferences do, of course, vary in the extent to which speakers stick to their themes, with ‘theme’ in the loosest of cases being more a mild recommendation that presenters may or may not wish to follow.

Sticking to the theme 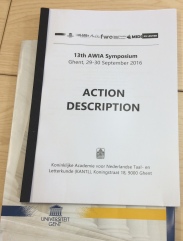 Conferences do, of course, vary in the extent to which speakers stick to their themes, with ‘theme’ in the loosest of cases being more a mild recommendation that presenters may or may not wish to follow. The AWIA Symposium 2016, though, fell at the stricter end of the spectrum, with speakers going beyond simply reporting their work to reflect upon the kinds of deeper issues and ideas that Sidnell had touched upon the day before.

This reflectiveness is, of course, testament to the symposium’s success at being “small-scale and informal”. Whereas a larger conference might compel speakers to fit their work to the traditional method-findings-conclusions model of presentation, there was a spirit of discussion and debate here, encouraged by a small-but-not-too-small audience comprised of both welcoming AWIA regulars and first-timers. While the symposium may have been more about asking questions than providing answers, then, one could leave Ghent feeling that these were, at least, questions well worth asking.

My Tweets
Join 3,465 other followers