Denmark has a thriving EM/CA community, with faculty and students contributing to world-class initiatives across the range of interaction research. Here Magnus Hamann tells us how Danish Interaction Linguistics grew from a simple idea to an project that has generated activity and funding for generations of postgraduate students.

DanTIN project has its 10-year anniversary. in November 2019. Happy students from different stages of life (some still students, some already accomplished contributors to the work force) have met to celebrate something that has probably had a bigger influence on their linguistic studies and identity than they had initially realised.

Setting the scene:  The Grammar of Everyday Life and DanTIN 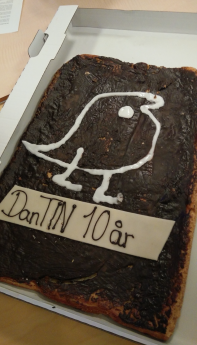 DanTIN’s wug mascot. What if there were more than one?

While a lot of background explanation would be required to explain how the students of linguistics in Aarhus University have a strong student-driven academic environment where the students themselves arrange weekly presentations, get-togethers and other activities, this will be skipped. All you need to know it that on one of these days (120 months ago), Jakob Steensig was an invited speaker to one of these events. He had to explain his research to this enthusiastic horde of curious brains.

Jakob explained that he had an idea. He would, as he had always done, study Danish talk-in-interaction. The only difference would be that Jakob, this time around, would aim to focus and collect his studies around creating a real grammar. A real grammar of the Danish language. Not a traditional grammar. But a grammar with findings derived from studies of real interaction. A grammar of the Danish (spoken) language in use.

While this vision could make you believe that Jakob is a dreamer, he was very aware how this vision sounded. And as he told the student, he would never be able to accomplish this alone. As such, the week after, the first ever DanTIN meeting happened in Jakob’s office.  Everybody had been invited the week before. 6 students showed up. 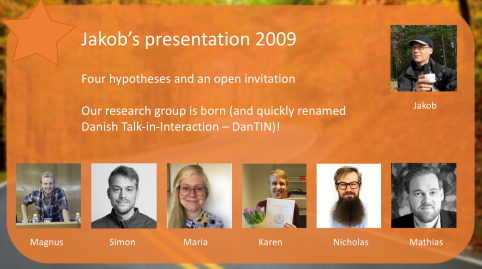 And that became the beginning of what has now been 10 years of systematic studies of Danish spoken language. In those ten years, Jakob has accomplished having 30+ students joining the project. While it may or may not sound as an accomplishment as such, I would like you all to know that these students came of their own free will, they did not get hired into the project as student researchers or assistants. They came because of Jakob’s ability to inspire and mentor. This year, Jakob (and those 30+ students)’s work was awarded as Jakob got a research grant to hire 2 PhD-students as well as a post doc for the project. Out of DanTIN, GEL was born.

To celebrate 10 years of DanTIN and the birth of GEL, 30+ people met up in Aarhus University. Outside it is November 2019 but inside time stands still. All the people in the room has some prior or present connection to the DanTIN-project. On this day students would skip their regular classes to be in this conference-like-event, former students called their employers stating they were sick or made other excuses to be present. Everybody had put their normal everyday life on hold to be present. Just for one day, the rest of the rumbling world outside was put on hold. They all came to see the culmination of what they had helped build and the birth of the next step in Jakob’s and their big project. 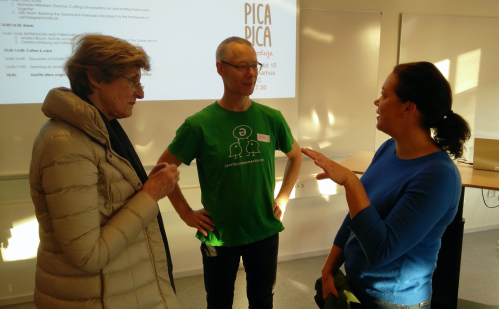 The day had been inspired by the way the DanTIN-grammar is presently also structured: Forms, Functions and Expressions & phenomena. This was a neat detail. Some things I really enjoyed on this day was those things that were arranged that did not take the form of a “regular” conference-paper-presentation. One of these was the pre-arranged discussion of syntax. Where Jakob would discuss the role of syntax (if any) in a grammar of everyday interaction. 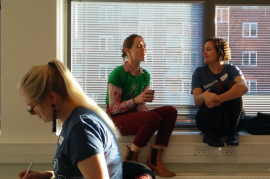 The two stances in play were whether we need a syntax to understand what people want to accomplish in interaction (that it is more relevant to study actions), or whether a description of an underlying syntax for action formation can be observed relevant for participants. The setup for this discussion was that both opponents knew the other’s arguments and they knew the examples the other would bring. As such, the discussion became very informative and interesting to witness. The discussants were not only those on stage but everybody in the audience were also invited to pitch in. And they did.

Fractured data: what comes next?

Another activity worth mentioning was the fractured data activity. A delegate had prepared and manipulated some excerpts. The excerpts only contained the turns of one speaker. But not the other speakers. The audience were then invited to “guess” using their member’s knowledge (or luck) when and where someone would/should/could respond and whether they would. The excerpts were, of course, a range of examples where the participants did not do the expected/called for next action. Which led to both laughter and interesting comments from people in the audience.

Besides the above mentioned things, the day also offered a plethora of particles, fixed expressions, modalities and all sorts of linguistic-interaction-research-items-in-presentation. Last but not least: Lunch, dinner and cake. 30+ people who over that last 10 years have been working on the same research project, across temporalities, now here. Together. For one day. Before normal time would resume and the day had passed. It was a good day, and a fitting recognition of ten years of adventurous, exciting work. 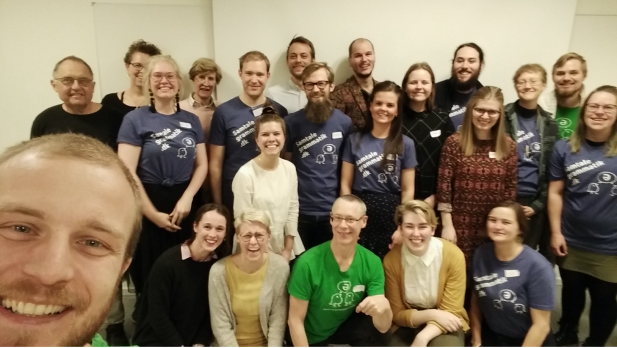 The DanTIN crew, ten years on. Magnus does the honours.

If you would like to see some examples of the kind of work that DanTIN people have been doing, have a look at: