To complement our earlier report on the 9th CA Day (see the previous blog for the organisers’ view), I’m delighted that Mika Ishino, on behalf of herself, Ritsuko Izutani and Aya Jodoji, all from the Applied Conversation Analysis Working Group at Osaka University, Japan (site in Japanese) has sent in this lively and comprehensive guest blog.

The 9th International Conference of Conversation Analysis (CA) Day was held on December 14, 2015, by the Discourse and Rhetoric Group (DARG) at Loughborough University in the U.K. This one-day conference has been organized each year for a day of talks on CA since 2006. The conference is comprised of a series of 30-minute paper presentations in an informal and friendly atmosphere with all participants together in a conference room. 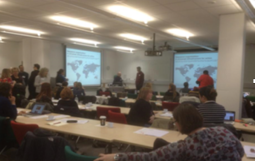 This year’s conference was attended by approximately 60 participants from Europe and countries in the Asia Pacific region, such as Japan and Australia. A lot of Ph.D. students attended (including some of the presenters and conference staff), as well as well-known researchers from in and outside of the U.K. This varied participant background reflects the conference’s excellent reputation among a wide range of research groups working on CA.

Medical Interaction. As five out of 11 showcases were based on video-recordings in medical settings, the showcase features were a range of works on medical interaction. The first presentation was made by Lewis Hyland from Nottingham University, U.K., with interesting data on dentistry training for tutors and students. Marzia Saglietti from the University of Bologna in Italy then presented; her preliminary working data come from doctor-doctor and doctor-nurse interactions in meetings regarding antibiotic medical treatments for patients. Her analysis interestingly captured the participants’ professional identity in their spoken interactions. The third presentation was also about medical encounters; it was led by Fiona Stevenson and her colleagues in the institutional research information service department at the University College London, U.K. Their research focused on interactions between junior doctors and consultants in accident and emergency care hospitals (described in an account in an earlier ROLSI guest blog). She noted that some data interestingly included known-answer question sequences between junior doctors and their consultants.

Stevenson et al: The A&E ward during a night shift

The following presentation was also on medical interaction, and was presented by Ruth Parry from the Faculty of Medicine and Health Sciences, the University of Nottingham and Marco Pino from the Social Science Department at Loughborough University, U.K. They presented very sensitive video recordings of end-of-life conversations between hospice doctors and terminal patients in their care. We then had the first invited speaker’s talk, presented by Prof. Rose McCabe from the Medical School of the University of Exeter, U.K. Although her research was based on much more psychiatric interactions with CA, her talk was well-organized and very understandable for audience members who were not familiar with mental healthcare or health services research, including me.

Afterwards, we had lovely lunch break with all participants dining together, and the sixth showcase was presented by Angeliki Balantani from the University of Essex, U.K. Her work was related to the assessment of action and accountability in local language and its universal feature of the formulation for defending one’s position. The seventh showcase also addressed assessment sequences, and was presented by Hatice Ergul from Hacettepe University, Turkey. Her research addressed local Turkish TV audience interactions and the audience’s assessment sequences. As the program was a reality-TV marriage matchmaking show, we were more relaxed watching her data than in the morning sessions.

Another invited speaker’s talk followed, entitled “Flirting: A designedly ambiguous action?” It was presented by Sue Speer from the School of Psychological Sciences at the University of Manchester, U.K. After the invited speakers’ showcases, Kobin Kendrick from the Max Planck Institute in the Netherlands presented an outstanding large-scale study with his colleagues. He showed us the universality of expansion sequences among 12 languages with video-clips and quantitatively analyzed data as evidence.

After Kendrick’s talk, Marika Helisten from the University of Oulu, Finland presented her preliminary research on the multimodal accomplishment of activity using micro-analysis of multimodal interactional recourses; this was followed by the final presentation, which was an interesting multimodal analysis of personal space and the exchange of spectacles in a shop, and was presented by Brian Due from the Department of Nordic Studies and Linguistics at the University of Copenhagen, Denmark. He showed that shoppers and staff in spectacle shops interact smoothly with each other without using language as shoppers try on pairs of spectacles. All of the showcases were presented to all the participants as a group, and the 10-minute discussion times were always carefully governed by the conference chair, Prof. Antaki. Accordingly, question time was very academic and constructive for the presenters.

However, at the same time of such high-quality academic mood, the conference

organizers (Charles Antaki and Liz Stokoe) made very friendly and welcoming atmosphere among all participants, including those from overseas and master’s and doctoral students (see figure 2 for our photo at tea/coffee break). Therefore, in my view, attending the CA day was very worthwhile—even for CA beginners, such as master or doctoral students.

Lastly, what was most impressive at this year’s CA day was the “CA-ke-off,” which was a new bake-off-style competition: a prize was available to anyone who volunteered to bring cakes or biscuits for judging in the tea/coffee breaks. As the CA day was held during the Christmas season, there were many sophisticated works of confectionary on each table. All of the participants, including myself, really enjoyed tasting the various kinds of handmade sweets from the many volunteers among the conference delegates. At the close of the conference, we enjoyed the winner’s announcement as the conference’s closing ceremony. 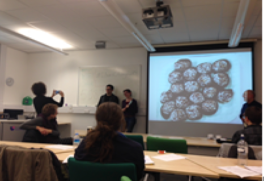