Tim Greer’s guest blog is a very welcome account of the pleasures (and pains) of working in two languages which are phonetically, syntactically and typographically very different.

Having lived in Japan for over 20 years, I have learned how to juggle Japanese and English in my daily life. And since my research focuses on Japanese/English bilingual interaction and learner talk, I have also had to discover ways to deal with these two very different languages in my analysis as well.

One of the first decisions I needed to make was which script to use when transcribing. Japanese uses a combination of four “alphabets”—one pictographic, two phonetic and one Romanized. So any word can be written in four ways: 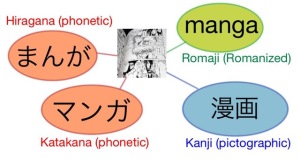 For CA transcripts I generally opt for just the Romanized script, not only to reach a broader audience, but also to provide for a finer level of granularity; details of the talk like elided sounds are impossible to render in kanji pictographs and since the phonetic symbols combine a consonant with a vowel, it is difficult to accurately place the onset of overlap in many cases.

Is the word Japanese – or English?

But one of the most basic challenges is deciding whether certain words are in fact Japanese or English. For example, the uptake tokenうん (“un”) is ubiquitous in Japanese interaction and it often sounds very similar to the English receipt token “mm”, which holds much the same function. Even though participants very rarely orient to it explicitly as one or the other, the transcriber is faced with the problem of whether to write it as “mm” or “un”. This may not sound like a huge issue, but it can easily impact on the analysis when you are trying to make a case for code-switching boundaries.

And without a doubt, the most frustrating aspect is having to translate all of this, not because it is difficult but because two extra tiers in the transcript can eat greedily into that precious word count.